Tulipanomania in Bardolino: 50,000 flowering bulbs on the lakeside promenade

The wonderful world of tulips

The elegance of the Camellia

The Englishman's Paradise on the Ligurian Riviera. Stories, landscapes and people

Donating a miniature tea plantation is an original and symbolic gesture

Spontaneous herbs: recognizing and tasting them 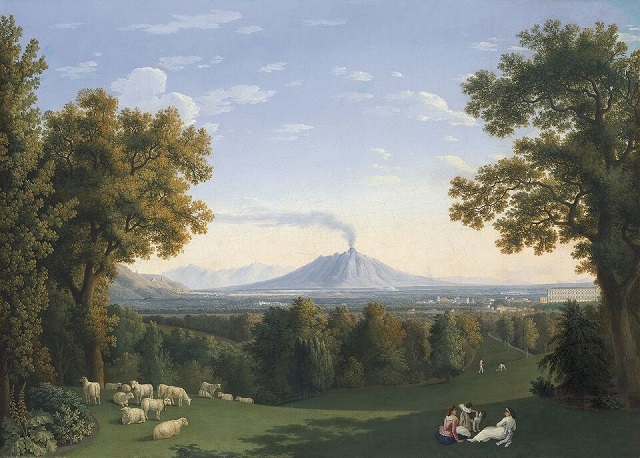 In the Halls of the Queen’s Apartment, overlooking the incomparable view of the Royal Park with its scenic waterway, the most accomplished and well-preserved of the residences that Charles of Bourbon, King of the Kingdom of Naples from 1734, and his wife Maria Amalia of Saxony wanted as a sign of power and refined and cosmopolitan culture, is celebrated with an exhibition with an unprecedented slant that combines scientific research and spectacularity.

About two hundred works including paintings, drawings, sculptures, herbals, books and art objects and contemporary interpretations tell the story of the garden. From the Reggia di Caserta complex, themes and events unfold, bringing into play and relating systems of villas and gardens that span and interest the entire peninsula, from the Renaissance to the early 19th century. The result is a kaleidoscope of representations that, in the diversity of landscapes, cultural models and lifestyles, evoke, through contact with nature, the lost Eden to which man has always aspired.

The rich exhibition project, in focusing on the various themes linked to the history of the Royal Park of the Royal Palace of Caserta, also retraces that of the ‘garden’. Present in man’s imagination throughout the centuries and the various civilisations, it has developed various compositional models. The formal designs of the “Italian-style” or “French-style” gardens and the freer “English-style” model, in parallel with the evolution of botanical science, correspond in fact to the different cultural contexts of which they are an expression.

The immense Green Museum of the Vanvitellian Complex, which boasts an extension of 123 hectares of parkland, 60 of woodland and about 40 kilometres of aqueduct, built from 1752 onwards with Luigi Vanvitelli’s initial design as an open space in connection with the Royal Palace to amaze the world, links, in an ideal fil rouge, the cultural references of Charles of Bourbon with his famous great-grandfather Louis XIV and the universal model of Versailles, with his refined mother Elisabeth Farnese and the northern European contribution of his wife Maria Amalia of Saxony. This extraordinary work was enriched half a century later by the innovative and astonishing English Garden commissioned by Maria Carolina of Lorraine. It combines the scenographic setting of water and fountains with the balanced inclusion of the unique rural and marine landscape with the majestic presence of Vesuvius. It thus becomes the ideal venue to narrate how the garden is among the most fascinating and fragile identity elements of European and Italian culture in particular.

Numerous works, many of them previously unpublished, from prestigious Italian and European museums and institutions, as well as from private collections, libraries and other public institutions, are presented in the various sections. Among the many artists, of the calibre of Gaspar van Wittel, Claude Lorrain, Paolo Anesi, Pietro and Gianlorenzo Bernini, Hubert Robert, Hendrick van Cleve III, Jules-César-Denis van Loo, Giusto Utens, Joseph Heintz the Younger and other famous vedutisti, a prominent role naturally belongs to Jacob Philipp Hackert, who dedicated so many works to the gardens and landscapes of Campania and Southern Italy.

The sections develop the themes that unfold from the Royal Palace of Caserta and its history, juxtaposing and comparing what was produced by other patrons and other contexts:
– the Royal Palace of Caserta and its models, with the famous depictions of the Royal Park of the Royal Palace of Caserta juxtaposed with those of the gardens that Charles and Maria Amalia knew and experienced in their countries of origin and that shaped their taste;
– the relationship between garden and landscape highlighted in the views of well-known gardens ranging from Campania to Lazio, Marche, Tuscany and Piedmont, interpreted by the major artists of the periods considered;
– gardens as stage sets to show how the display of power, festivals, theatre, have always had gardens as a privileged backdrop, adapted and declined according to the functions they accommodated;
– water and gardens in which the former is the spectacular protagonist of plays, fountains and waterways, but also a privileged backdrop along lakes, rivers and the sea;
– gardens and wildness in which woods and estates complement the villas and gardens, from the tradition of the Medici gardens up to the 19th century;
– gardens as settings for sacred and mythological narratives, from the depiction of the ‘gardener’ Christ to mythological or literary episodes, to allegories of the seasons, such as those by Pietro and Gianlorenzo Bernini;
– botany in the garden, the plant element as a protagonist with different roles and functions related, for example, to ‘tulipomania’ or the introduction of exotic plants and the rise of botanical science.

The exhibition has a spectacular impact due to the many works of art deployed, on an intriguing theme. Above all, it is based on in-depth scientific research by highly authoritative scholars and specialists in the field, offering a reflection on a sector of our heritage that is central in this historical phase. As never before, in fact, institutions are promoting initiatives for the conservation and enhancement of historic gardens, considered in terms of both their cultural value and their social wellbeing, through considerable funding for restoration and management. In parallel, the need for targeted specialised training has become clear.

With this contribution of knowledge, conveyed also thanks to the charm of an incomparable place such as the Reggia di Caserta, the aim is to promote greater awareness of the importance and value of this heritage, which is so fragile and precious in its being the fruit of the harmonious interaction of man with nature.

The exhibition is also an opportunity to experiment the languages of contemporary art with Fondazione Kainon, a technical partner, through the virtual reconstruction of a first part of the garden imagined by Luigi Vanvitelli in the famous Declaration of Drawings and the punctuation of contemporary artists who freely interpret the concept of the garden as a possible Paradise.

The exhibition, organised by the Museum of the Royal Palace of Caserta with Opera Laboratori, has a prestigious international scientific committee and the fundamental contribution of the Botanical Gardens of Naples and Portici. The initiative is realised in partnership with the Chamber of Commerce of Caserta and with the support of Amici della Reggia di Caserta, Colonnese&Friends, Associazione Parchi e Giardini d’Italia, Grandi Giardini Italiani and European Route of Historic gardens.

The elegance of the Camellia

The Englishman’s Paradise on the Ligurian Riviera. Stories, landscapes and people

The Renaissance of Boboli

Tulipanomania in Bardolino: 50,000 flowering bulbs on the lakeside promenade