Sinful fragrances to cure the moods

Yoga on the waves of the sea: here's the WOGA

Care of the look ... to the sound of dollars

In July and August my surgeon doesn't know you

Swimsuits Proof? Obsession makes you fat. And also the sense of guilt 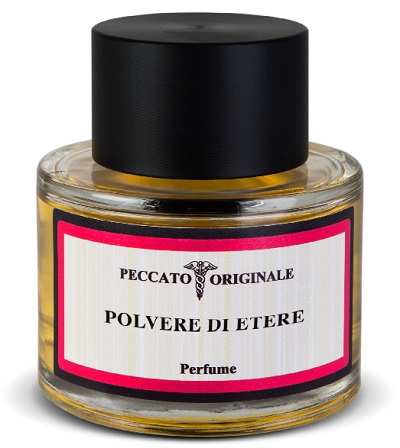 Ether as the essence of the celestial world; the highest, purest and brightest part of space, beyond the limit of the earth’s atmosphere. A solid syllable that represents the superior air that only the gods breathe, as opposed to the air inhaled by mortals.
Ether is the Quintaessence of the Philosopher’s Stone, able to catalyze the transformation of metals into gold, to make man reach absolute knowledge and immortality. This prescription fragrance wants to transform materiality into Spirit. The soft and comfortable base of Vanilla and Amber are the end of the process of perfection and transformation of the vile lead, or what is vile, in philosophical gold or what is noble. On the skin, jus gives the wearer the crystalline energy of the universe and its eternal and immutable Life Force.

Peccato Originale was born from the wisdom and creative mind of the pharmacist Silvia Monti, who in the cellar of the family pharmacy has discovered precious elements – ancient recipes, dusty boxes for galenic preparations, writings and labels with an archaic and indescribable taste – that have told her stories and have enchanted and inspired her to create a brand of unique artist’s perfumes: Peccato Originale. 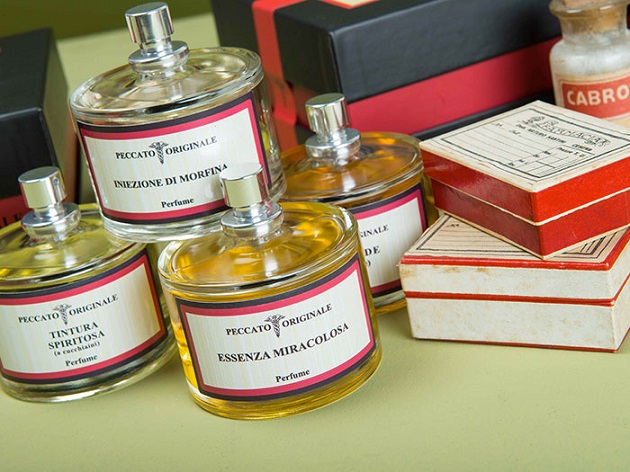 Since her birth Silvia has been super creative and curious about the altars and expiations of mankind. She makes this profession an artistic expression by creating these fragrances. For her, the pharmacy is a privileged point of observation, from which to look at humanity from within, so as to know the drives and fragility, insecurities and anxieties, joys and happiness. It is a present place where men, women and children pass by with all their lives and psychophysical deviations; deviations that are the daughters of an imperfection that is the original sin of man; to name a few, resistance and temptation, good and evil, mystery and ambiguity, the man of solar ancestry and the woman of lunar prerogative, life and death.
With Original Sin the drug becomes a fragrance that cures the moods of mankind an emotional support, a traveling companion who sometimes stands by your side for an entire life. Peccato Originale proposes fragrances that stimulate the senses, olfactory harmonies born from the translation of Galenic recipes of the ’20s, where the spirit of the fragrances becomes light and fresh, leading to discovery and new sensory journeys.
6 fascinating “sinful” unisex fragrances: Antisocial gas, which contrasts the influence that we can suffer from the “malignant narcissists” that surround us, a jus with a strong and decisive spirit that protects the wearer; we continue with Injection of Morphine, charismatic and enterprising, elixir based on Opium is the source of inspiration. It quickly becomes addictive and addictive; and again Cantaride (brushstrokes), an ancient remedy for reinvigorating the weak amatory forces, an aphrodisiac with a poisonous character. Bright and sensual, it is a perfume with soft and elegant tones but with a strong character.
Miraculous Essence recalls the “bitter almond syrup” used to counter sudden fainting, seeking physical and mental stability. It was believed that the
administration of the syrup could stabilize situations oscillating between two opposites giving solidity to the soul and body, a fragrant scent that tickles the skin is Tinctura Spiritosa (spoonfuls), anti-invasive tonic that originates from the spirit, to tone the Spirit. Last but not least, Antidote (reactive), a powerful antidote against the slow poisoning of individual daimon, a lively and vitaminic accord of Lemon and Yellow Mandarin, enhanced by warm, effervescent and sparkling notes.
But it doesn’t end here… An original sin is also the home fragrance with Pill (when needed), a “pill” to be sprayed when needed, within which to enter and find a mysterious lightness. A fragrance that makes the sense of smell fall in love with intriguing, almost paradisiacal, notes.
Fragrances follow a path between what could be called the “world of smells” and the “world of perfumes”, that olfactory furrow in which also run, for the most part, the fragrances of galenic preparations. Through these passionate fragrances enclosed in the philosophy of ORIGINAL PECKET.

For Genoa also a cultural bridge

Neck and décolleté, let’s see them. Remedies to keep them young at all times
Related Topics:beautybonvivre.eufirstfragrancesperfumes
Up Next

Yoga on the waves of the sea: here’s the WOGA